LINCOLN, NEB — Duncan Aviation recently held a private unveiling, called a vernissage in the fine art world, of the exterior and interior completion of one of its company aircraft. The commissioned design was created by renowned artist Nancy Friedemann Sánchez, a Colombian-American contemporary artist who has held exhibitions across the world and is based in Lincoln, Nebraska. Her design was requested by Duncan Aviation Chairman Emeritus J. Robert Duncan and his wife Karen and  brought to life on a company-owned Citation 560XLS through the aircraft artisans of Duncan Aviation’s Lincoln-based full-service maintenance, repair and overhaul (MRO) facility.

“Working on a commissioned art piece is quite different from expressing yourself in a piece for a personal show,” Friedemann Sánchez’ says. “You want to please the client, so you really listen to their desires and preferences. This piece began as colonial flowers on black. Teri Nekuda helped tremendously with the application of the artwork to the aircraft. (With the required reflectant value on Citation aircraft), black couldn’t happen. And because the canvas was an aircraft, we couldn’t have a direct mirrorization of my work.”

Teri Nekuda, Completions Designer with Duncan Aviation, has been instrumental in designing Duncan Aviation’s other unique exterior paint schemes including an orange and yellow plaid Citation Mustang, an apple green Citation M2 with red, blue, and yellow paint splotches, and a red and black Learjet 35A that was nicknamed “Spiderman Lear.” When Duncan Aviation purchased the 560XLS, she knew the team would be challenged to push the design envelope even further.

“Robert loves the wow factor,” Nekuda says, “and this aircraft certainly provides that. It is definitely a conversation starter.” The design process took more than 12 months and Nekuda found it extremely satisfying to work on. “Nancy was a pleasure to collaborate with and we had a lot of conversations about the colors, paint reflectant values, and how the artistic elements would conform with the angles and shapes of an aircraft, as well as how aviation regulations would affect the overall design.” 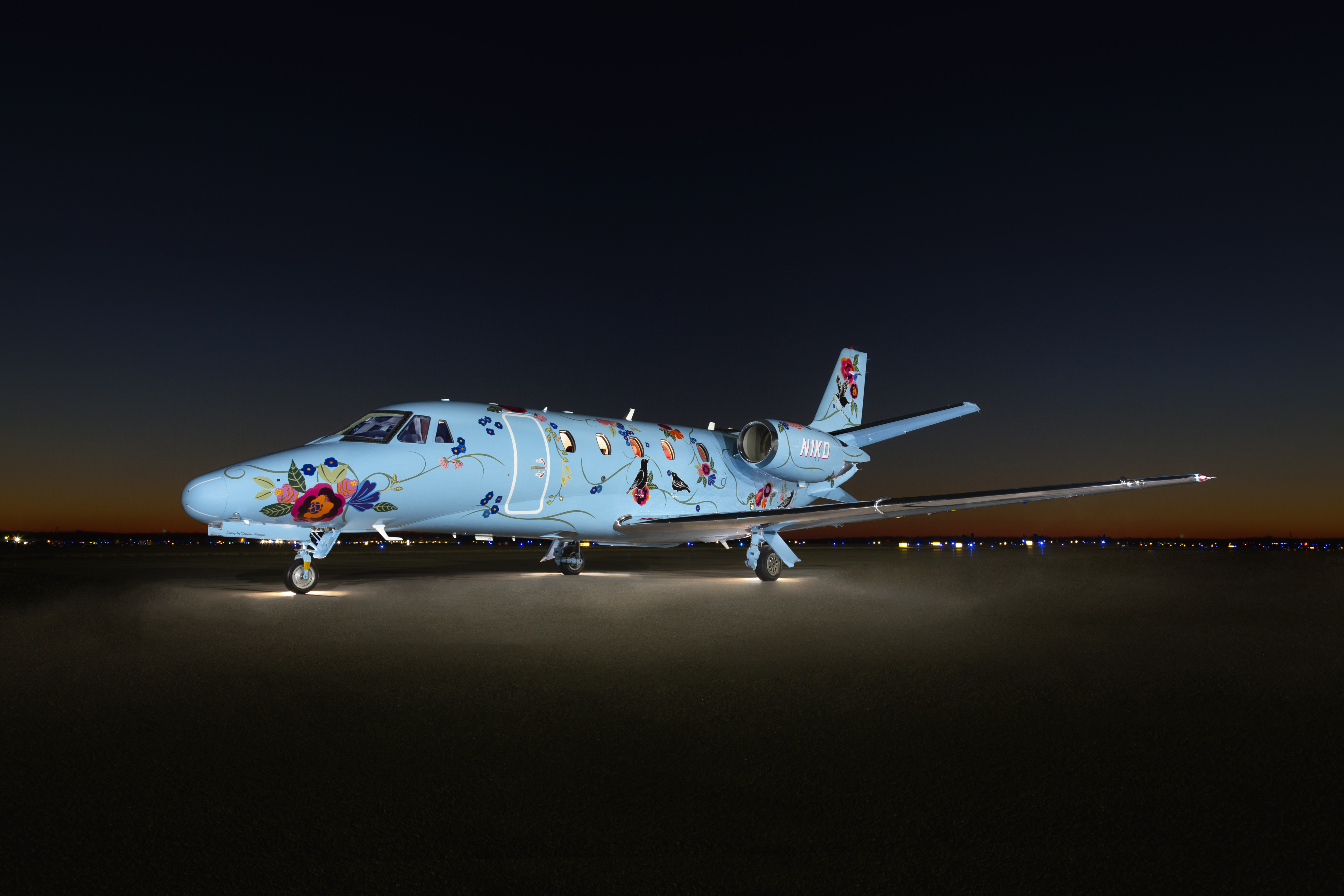 The Process
Friedemann Sánchez started with small sketches of the various elements, and progressed to larger collages. Nekuda then scanned them and used computer design software to overlay them on the aircraft. Together, she and Nekuda worked with Paint Master Specialists Stacy Finch and Troy Reinke and Paint Layout Specialists III Justin Machacek to refine and fine-tune the elements and painstakingly test them with a myriad of colors. Ultimately, they chose a base color of Medium Blue, a robins-egg blue that Friedemann Sánchez says is vibrant and reminiscent of sky but doesn’t detract from the flowers and other elements.

“We then went back to hand-drawing on the airplane,”  Friedemann Sánchez says. “I worked with Stacy, Troy and Justin as they developed stencils for the various elements and together we wrapped the flowers around the aircraft, adding vines and other pieces where they were needed to tie the elements together and create the proper movement. The team at Duncan Aviation is just marvelous. They are masters and the finished product becomes a hybrid of all of the visions involved…. But those are my flowers. They represent my work. It’s me.”

Paint Layout
All in all, the aircraft design utilizes 23 specific aviation paint colors and competing the design required 101 rolls of painter’s tape, 75 paint mixing cups, 135 cup liners, and 288 touch-up brushes. The artist’s final two-dimensional rendition was created with brush strokes on canvas, Finch explains. “We had to convert those brush strokes into solid paint colors that we could apply with spray. The aircraft was divided into 14 sections and we had a team of six who would mask and unmask as needed to apply each color to the different areas. Since everything is covered, it was a challenge to remember where each color went. It’s like working on a big puzzle.”

Finch and Reinke have worked together for 21 years and with Justin, the trio has a combined 50 years of aviation paint experience. The paint layout team has brought many complicated and unusual paint schemes to aircraft, including digital camoflauge, psychedelic lines, paint fades and metallic creations.

“This was a challenge, but I enjoy challenges,” Finch says. “When Nancy, Robert, Karen and Teri came in for final paint approval, they all seemed pleased and had smiles on their faces. In the end, though, I think the work speaks for itself.” 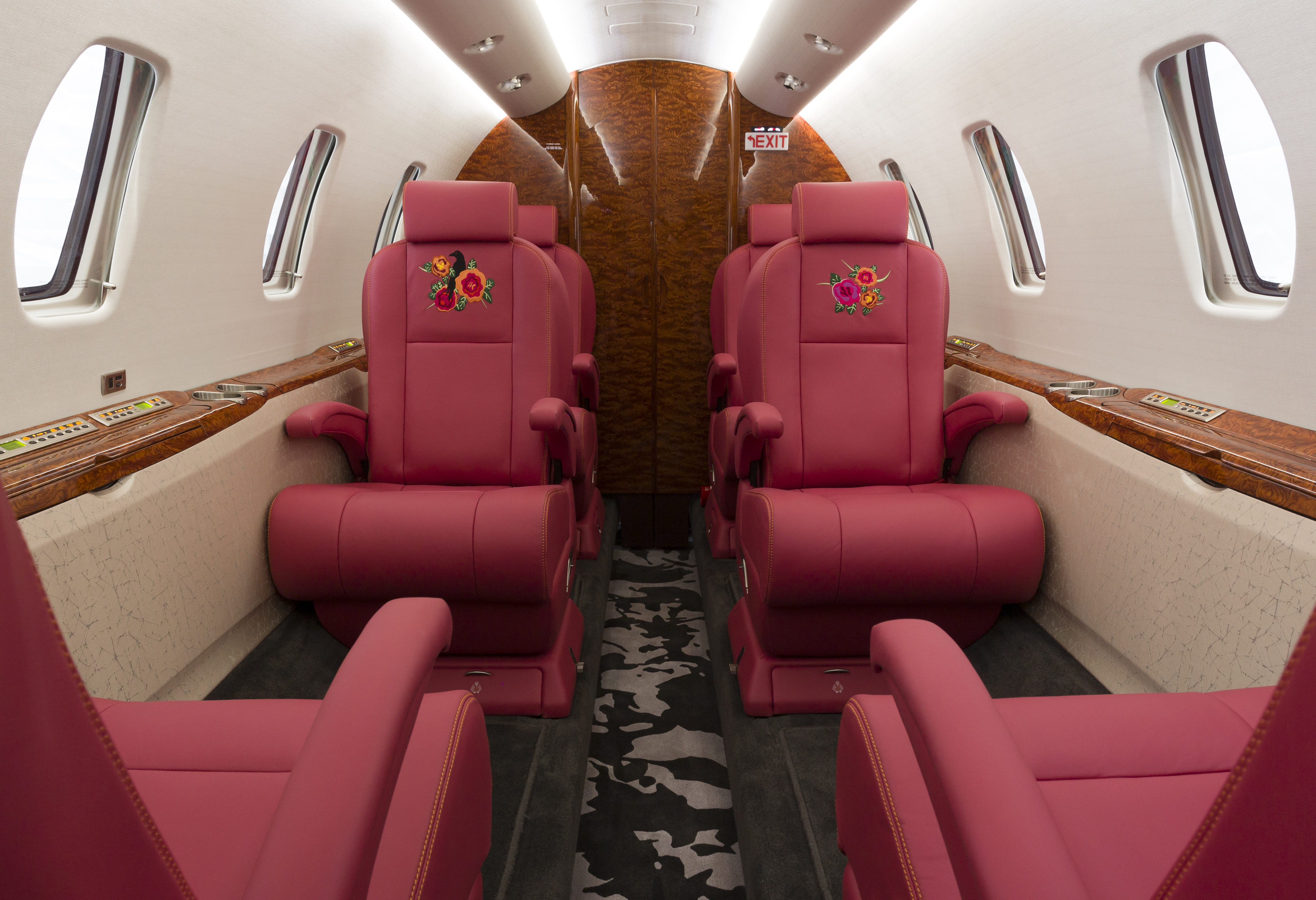 The Interior
The interior of the aircraft was in decent condition, but with such a unique paint scheme, it needed to better complement the exterior. The Duncan Aviation team kept the veneer and cabinetry, but refurbished the headliner, the window panels, the lower sidewalls, the seats and the carpeting. The interior sports strawberry and cayenne colored leather and includes intricate embroidery, including a special raven in honor of Karen. The aircraft’s unique carpet design has a cut pile with an abstract dropdown well and a design that is reminiscent of animal hide.

The Flight Deck
The flight deck of the aircraft was upgraded to the Garmin® G5000™ avionics suite, and is the first installation of the G5000 completed by Duncan Aviation. Features of the G5000 include a dual multi-sensor flight management system (FMS) and three high-resolution 14-inch flight displays situated alongside dual touchscreen controllers. Intuitive menu structures contribute to the ease of operation and straightforward user interface that gives pilots useful information at their fingertips to include weather, synthetic vision, electronic flight charts and aircraft synoptics.

Duncan Aviation and Robert Duncan in particular have a special connection with this system. The Garmin 3000 system, announced at NBAA in October 2009, was promoted as the first touchscreen-controlled glass flight deck for light turbine aircraft and was a principle reason Duncan Aviation purchased its M2 aircraft. 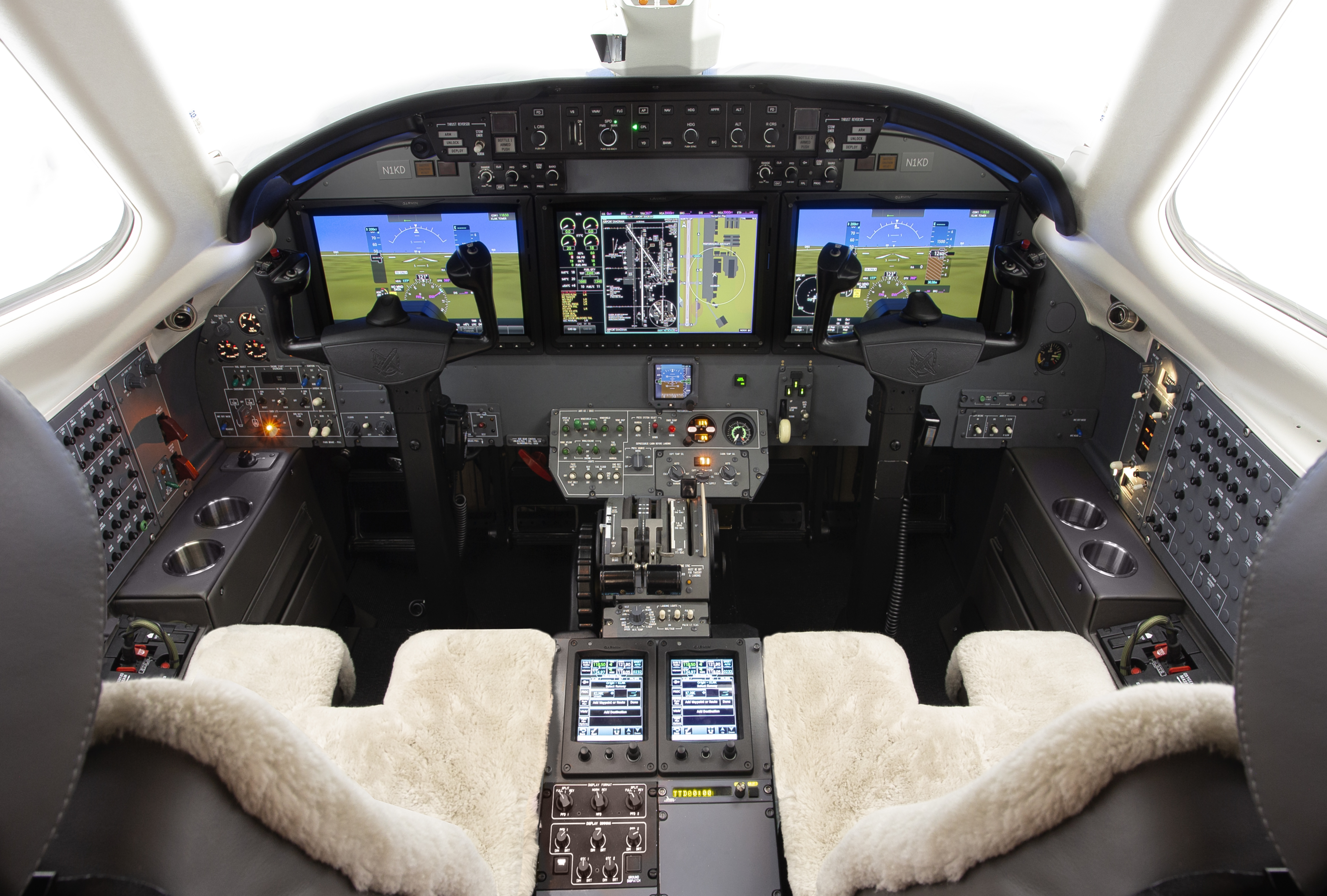 “I love the simplicity and the intuitive ease of flying with the Garmin 3000/5000 avionics suite,” Robert Duncan says. “I chose to wait until the G5000 system was installed in our XLS to get my type rating on that aircraft. The high resolution screens, touch controllers and many features of the software are remarkable in that they automate tasks, keep me safe and will help extend my years as a pilot. Karen says the Garmin systems have turned these aircraft into flying computers.”

The Image
Although the work done to the Citation XLS was kept as secret as possible before its offficial unveiling in early November, it will not be secret for long. The goal for Karen and Robert Duncan was to make a statement.

“It’s a flying, traveling billboard that catches people’s attention and shows them that Duncan Aviation is different,” Robert Duncan says. “It is a great way to share our innovation and creativity as a company, the talent of our team members, and the quality of our workmanship. It has been fun to work on. People are either going to love it or they’re going to hate it. There will be no middle ground. But everyone will talk about it.”

Ryan Oestmann, Project Manager for this aircraft workscope, said the aircraft is representative of what is possible through the teamwork and innovation of Duncan Aviation team members. “Personally, I love it,” Oestmann says. “I think it is great that Robert and Karen were able to take their passions for fine art and flying and combine them into a spectacular showpiece is nothing short of amazing.”

About Nancy Friedemann Sánchez
Nancy Friedemann Sánchez’ borrows from an eclectic source including botanical illustrations, actual lace samples, and depictions of lace from Spanish Colonial painting in her drawings and painting in order to examine the invisible paths of cultural memory born from her homeland Colombia. Her work has the influence of Minmalism and The Pattern and Decoration Movement. Her art points to the passage between Modernism, patriarchy and what is personal and feminine; she explores the threshold in flux that signifies living with history, and in between cultures and languages. Moreover, as a woman artist, to depict flowers and lace inside an art historical contexzt and within a contemporary environment of art institutions and galleries creates a link to definitions about femininity and to their significance and hierarchy at the interior of mainstream establishment.

Friedemann-Sánchez has been awarded a Catherine Doctorow Prize on Painting, a Nebraska Artist Achievement Award, a Smithsonian Artist Fellowship, a Puffin Foundation grant, a Pollock Krasner Grant, and a National Association of Latino Arts and Culture grant . She has also received an achievement award from the Nebraska Arts Council.

To learn more about Friedemann Sánchez, visit www.NancyFriedemann.com or www.FiendishPlots.com.

About J. Robert & Karen Duncan
Robert and Karen Duncan are passionate about visual art and have traveled the world searching for works that capture their imaginations. Their private collection of more than 2,500 works has been featured in numerous publications, including Art and Antiques, Sculpture Magazine, the Wall Street Journal, and Nebraska Life.

Robert Duncan’s father founded Duncan Aviation in 1956, and Robert began helping out while still a student. In 1963, the Omaha, Nebraska-based company moved to Lincoln’s airport. Only three years after graduating from Northwestern University in 1965, and at age 26, Robert was named president. In that role, he was instrumental in taking Duncan Aviation from a small, aircraft sales organization to a service enterprise that offers a diverse service array of business jet maintenance, interior and exterior completions, avionics modifications, and component overhaul and repair in addition to business jet acquisition and sales.