Selling An Aircraft During A Global Pandemic

In the early days of the COVID-19 pandemic, an industry partner referred Tim Barber, a member of the Duncan Aviation Aircraft Sales & Acquisitions team, to a client to assist in the sale of a Global Express XRS. With the aircraft’s 120-month inspection looming in early December, the client was motivated to quickly sell the aircraft to avoid incurring the costs and delay involved for the upcoming inspection. Despite being on the brink of a global pandemic, this sensibly priced, fully-loaded aircraft with a highly motivated seller made for a quick transaction.

Anticipating an environment where travel was going to be increasingly difficult due to worldwide restrictions and travel bans, Tim knew he would improve his chances of selling this aircraft if he had the European-based aircraft relocated from Farnborough, United Kingdom, to somewhere in the United States.

“At that stage, around 90% of enquiries were from the United States, so it was a matter of working out the statistical odds,” Tim says.

In addition to the travel restrictions put in place by the United States and the United Kingdom, Duncan Aviation banned all but essential travel in order to comply with World Health Organization guidelines to flatten the curve in the early days of the pandemic. Tim knew perfectly well the challenges he faced trying to sell this aircraft in a marketplace experiencing increasing uncertainty, restrictions, and fear. Backed by a team composed of technical aircraft sales consultants, in-house flight operations staff, and 2,150 airframe, engine, and avionics technical specialists located around the world, Tim got to work.

In spite of the challenges of a world pandemic, the Aircraft Sales & Acquisitions team was confident that relocating the aircraft to the United States would prove beneficial for their customer.

The Global Express XRS was brought to market on March 24th, and relocated to Duncan Aviation’s Provo, Utah, facility on April 2nd to make the aircraft more accessible.

When the aircraft and crew arrived in Provo, the crew was treated with the utmost care and proper precautions before immediately departing to return to the United Kingdom.

After arriving at the Provo facility, the aircraft was towed to a storage hangar where it was quarantined until it was deemed safe for our team members to board and prep for viewing. The Global Express XRS was then ready for viewing by potential buyers, all of whom were domestic United States
residents who flew in via private aircraft to avoid commercial travel and limit exposure to COVID-19. Customers were informed of our company guidelines and measures, allowing for limited access for visitors. The aircraft was positioned near hangar doors to support this limited access.

“Whenever a potential buyer would come to view the aircraft, we positioned it near the hangar door to allow access from the ramp. This made the aircraft convenient for viewing and decreased the amount of time the buyers had to spend indoors,” FBO Services Manager Bob Cornett said. “We would open the door, they went in and viewed the aircraft, and then they got out and immediately departed the facility. This positioning helped us protect prospective buyers and our team members.”

Duncan Aviation team members were required to wear masks and waited outside the aircraft entryway when a prospective buyer walked through the aircraft. The lobby was wiped down after each visit as well. Duncan Aviation’s standard protocols and courtesies were also consistently observed to protect the privacy and property of our clients and visitors.

This transaction is a great example of how teams from across the world can come together for the good of the client. Sales and Design Director Ryan Huss and Airframe Service Senior Sales Rep Troy Nail, both located in Lincoln, Nebraska, put together an exceptional package to offer the seller to relocate to Provo.

“Without Ryan and Troy’s great package deal, there is a significant chance we wouldn’t have relocated the aircraft to the United States,” Tim says.

Customer Service Manager Russ Haugen managed viewings of the aircraft in Provo, and without his support, the aircraft would not have been available for visitation. Project Manager Adam Phipps coordinated all of the routine maintenance requirements, checks, and inspections, while Airframe Service Sales Rep Stef Sedam and Completions and Modifications Sales Rep Adam Bruce worked day and night to put together a potential upgrade package for the purchaser.

“The buyer was very well organized, knew what he wanted, and was well versed in the industry,” Stef says. “The Sales Team and I put together comprehensive offers based on the knowledge of the aircraft being at the Provo facility. We were able to walk through the aircraft, analyze the data, and make decisions based off the information available.”

Adam says, “We have developed a good understanding of what the buyer likes, and showed him how Duncan Aviation can fit his future needs.” Adam continues, “Every customer interaction is a potential future transaction, so we do not take these owner-based calls lightly!”

“Concerns over the speed of the deregistration process during COVID-19 were proven to be unmerited when this was actually confirmed in just 27 minutes,” Tim says.

An EASA (European Union Aviation Safety Agency) crew was required for the test/delivery flight because the crew had to be approved by the registry under which the aircraft is flying. Therefore, an FAA (Federal Aviation Association) approved crew was not recognized by the United Kingdom CAA.

The aircraft was on a United Kingdom Air Operator Certificate (AOC), therefore it could operate as a commercial airline, making the crew’s travel exempt.

From the time the aircraft was brought to market, it sold in 69 days.

According to AMSTAT, a business aircraft market research platform, the standard Global Express XRS listing has been on the market for 254 days. This aircraft was the fourth Global Express XRS to sell this year, with the others taking an average of over 200 days to sell.

“A very cooperative client, an equally pragmatic buyer, and a great team at Duncan Aviation was the reason this aircraft sold in such a short time,” Tim says. “This really demonstrated what Duncan Aviation is capable of doing, even during a global pandemic.” 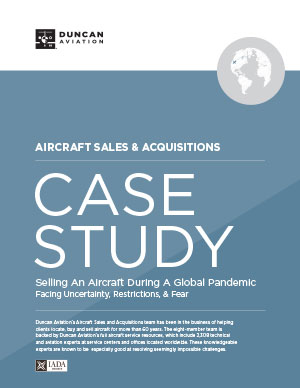 Duncan Aviation’s Aircraft Sales and Acquisitions team has been in the business of helping clients locate, buy and sell aircraft for more than 60 years. The eight-member team is backed by Duncan Aviation’s full aircraft service resources, which include 2,308 technical and aviation experts at service centers and offices located worldwide. These knowledgeable experts are known to be especially good at resolving seemingly impossible challenges.