Proof That If You Build It, They Will Come!

Duncan Aviation’s third full-service facility, this one at the beautiful Provo Airport in Provo, Utah, is fully operational. In January, we opened a new building and the first of three new hangars. Immediately, the spacious hangar filled with aircraft projects and the building was claimed by offices, conference rooms, and support areas. By the end of April, the new paint complex was open for business. And in June, a second maintenance hangar was online and operational. In the first quarter of 2020, the final building and all support areas and back shops will be open and house more than 200 team members who will provide all aspects of aircraft service and support.

“Our team here is excited and energized by the growth and expansion because that’s given us the opportunity to serve our customers in a more complete capacity,” says Vice President of Provo Operations Chad Doehring. “We can now provide the full range of services for which Duncan Aviation is known. Our customers are excited to have this level of service here in Provo, and that in turn gets our team excited.” 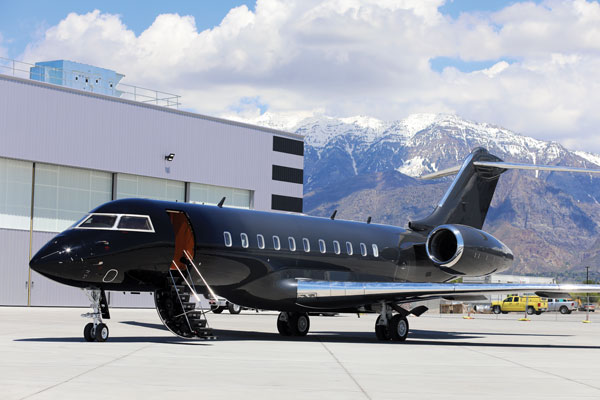 In early May, a striking Global 5000 was the first aircraft to roll out of Duncan Aviation’s state-of-the-art Provo paint hangar with an eye-catching new exterior. As the newly painted Global sat on the ramp, Tom Indseth, Director of Maintenance for Skechers, explained why he was pleased to have been the first paint customer there.

“Although this project was the first aircraft painted here, it didn’t feel like it. Everyone working on our Global had such confidence,” says Tom. “The paint scheme turned out great! From the initial design vision everyone had to the delivery of the completed project, Duncan Aviation executed.”

Members of the Provo Paint Team had been training together for months at the Duncan Aviation facility in Lincoln, Nebraska, and many members of the team are veteran paint experts. In April, when the paint hangar opened, the team was fully trained and ready to go, and they were excited to work on such a unique and complicated paint scheme.

“The last 18 months of planning, building, and staffing our Paint Team in Provo has finally become a reality,” says Duncan Aviation Director of Paint Operations Doug Bohac. “I had the confidence in the team to take on a special request—this Global with a complicated fade scheme—for our first paint job. The Paint Team did a phenomenal job, and we have an extremely happy customer.”

The paint scheme featured a metallic black-to-charcoal fade that was designed by Duncan Aviation Aircraft Designer Teri Nekuda. She’s had a long relationship with Tom Indseth and Skechers, so when they wanted their Global painted, she and Duncan Aviation 3D Designer Dan Ryba sat down with them to develop the right look for them. The Skechers’ team was sold on the design when they saw Dan’s 3D rendering, and Tom was delighted that the finished paint scheme held no surprises.

“It absolutely remained true to the vision and true to the rendering,” says Tom. “The new hangars here in Provo are great, too. We’ll definitely be back.” 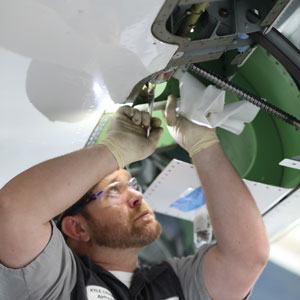 Since opening the first new hangar, the Airframe Team in Provo has been busy with a variety of airframe inspections, including several 120-month inspections on Globals, and inspections and scheduled maintenance work on several Challengers, Falcons, and Cessnas.

“Our Interior SWAT team has been busy, and we’ve replaced carpet and reupholstered passenger and cockpit seats. Install is keeping busy, too, with ADS-B upgrades and Gogo AVANCE L5 installations,” says Chad.

The Engine Shop has worked on Rolls Royce, Pratt & Whitney, and Honeywell engines, and Duncan Aviation has a Rapid Response Team based in Provo that performed a double engine short-duration engine change on a Falcon 7X.

“The Line Services Department, which recently received Stage I IS-BAH certification, has been building up base customers here locally, and we’re starting to see quite a bit of transient traffic now that our ARINC radio frequency (131.575MHz) is operational,” says Chad.

“We’re pleased to provide this level of service in this part of the country, and our customers have been pretty vocal in their praise,” says Chad.

Harlow Norvell, Chief Pilot for MRK, LLC, in Reno, Nevada, is a longtime customer of Duncan Aviation who is impressed with the new facility. “I was struck by the enormity of Duncan Aviation’s commitment out here. They made the new facility the best it could possibly be,” says Harlow. “The quality of the buildings is impressive; they are beautiful and sophisticated. I’m especially pleased to know that the new, state-of-the art paint hangar meets all of the strict environmental laws in Utah.

“Duncan Aviation’s commitment to the area extends beyond the impressive new facilities to the experienced team they’ve assembled out here,” continues Harlow. “It’s pretty impressive to me that so many long-term employees are so committed and loyal to Duncan Aviation that they’re willing to pick up and relocate their families to Provo and start over to help fulfill the company’s mission. Every business investment is a gamble, and this was a big one. Duncan Aviation has established a nice footprint out here, and we will definitely take advantage of their presence.” 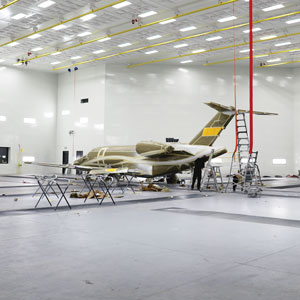 “The new paint hangar at the Duncan Aviation facility in Provo is the only truly green business aviation paint facility in the United States,” says Vice President of Provo Operations Chad Doehring. “It releases no waste products to the water or to the city of Provo. The facility meets the very strict air requirements set by the state of Utah and by the EPA. In fact, air from the hangar goes through an RTO (Regenerative Thermal Oxidizer) that burns off the VOCs (Volatile Organic Compounds), so more than 99.7% of the air we release is clean.”

Within the first two months of its opening in April, the team has painted the following aircraft: Global, CJ3, Falcon 900, Challenger 604, and a Gulfstream 450. Among its upcoming projects are a Falcon 2000 and a G450. Although most aircraft are from businesses on the West Coast or elsewhere in the Southwest, one aircraft recently arrived from South America for a full paint.