What is a legend? A legend is defined as a person or thing that inspires. Harry Barr was just that.

It was with heavy hearts that Duncan Aviation team members bid a final farewell to friend, aviation legend, and company staple Harry Barr when he died at his home in Raymond, Nebraska, on July 1. Born in 1935 in Clarinda, Iowa, Harry and Duncan Aviation founder Donald Duncan shared not just a home town but a passion for flying, and the two partnered in several business endeavors after Donald purchased a Beechcraft distributorship, the roots of Duncan Aviation, in 1956. Harry earned his private pilot’s license when he was 19 and during his lifetime, he flew aerobatic planes, experimental planes, helicopters, and jets. In 1964, Harry and his lifelong friend Clay Lacy were type- rated to fly the then brand new Learjet 23. From the early days of Duncan Aviation until his death, Harry was a pilot for the company.

Great human beings are often known for their humble demeanor, the passion and adventure they bring to their daily lives, or their quiet concern for fellow human beings.

“Harry embodied them all,” says Duncan Aviation Senior Captain Larry Bartlett. “With Harry, his work was his fun; it was hard to differentiate from when he was working and when he was having fun. And many have furthered their careers in aviation because of his mentoring and encouragement.

Because he had the means, he helped anyone who showed an interest in a career in aviation or flying.”

One of those Harry mentored was young Brazilian Pablo Branco. The two met shortly after Pablo’s parents had died and the man who’d taught him to fly, Eduardo, was killed in an air accident. Harry knew Eduardo and met with the grief-stricken Pablo to encourage him to keep his dream of flight.

“I told him there was just no money, but Harry assured me that if I could get to Lincoln, Nebraska, in the United States, he’d make sure I could continue with my flight lessons,” says Pablo. Pablo made it happen and within months, he reached the minimum required hours for his commercial check ride, racking up around 150 hours in Lincoln.

“By that time, I considered Harry my American father,” says Pablo. He went back to Brazil and was able to find a job as a pilot flying Learjets. “We kept in touch, and when I landed a job as a corporate pilot in the United States and brought the aircraft to Duncan Aviation for service and maintenance, Harry was always there at the hangar door when I taxied up to welcome me back.

“Harry made it happen for me, no doubt,” Pablo says. “I owe him everything. I don’t think I could have done it if it wasn’t for him.”

Duncan Aviation Director of Flight Department Maintenance Andy Bajc recalls the time Harry asked him to drive his Oldsmobile with a landing platform on top at a local airshow.

“We’d synch up, and he’d land the J3 Cub on the roof of the car,” says Andy. “Whenever anyone asked Harry how many times he’d had to practice the landing, he’d say, ‘Never practice anything you have to get right the first time’.”

Project Manager Howard Nitzel estimates that Harry made that landing over 100 times, and never scratched an airplane. 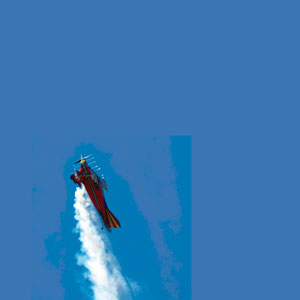 “One time at a Fourth of July Air Show in Seward, Nebraska, Harry got the landing gear stuck and rolled off the back of the platform with his SuperCub,” Howard says. “He pulled up, flew away, and came back and stuck it.”

Howard said that Harry’s late wife, Barbara Jean, was standing behind him and said, “You tell Harry that we are going to cut that platform up into little pieces and he’s never going to do that again!”

In typical Harry fashion, he proceeded to do it for another 20 years.

“Every summer since 1994, we flew in air shows together,” Doug says. “Harry always gave me the confidence and encouragement I needed. In 1987, not long after the Midwest Aerobatic Championships, Harry took me up in his Hiperbipe and had me perform inverted flight. I remember Harry took

over and immediately started performing aerobatic maneuvers. I totally lost orientation, Harry yelled, ‘yee haw!’ and I could feel my cheeks pull down!”

Doug continues, “He was a big part of my life during work and after hours flying, he will be greatly missed. All we can do now is take the memories and move forward, trying to keep the tradition of Harry Barr alive.”

Respected throughout business aviation, Harry was also known and loved by many groups in which he was an active member, such as the Midwest Aerobatic Club, the IAC International Aerobatic Club, the Experimental Aircraft Association, and the Warbirds of America.

Retired aviation legend Clay Lacy met Barr at the first Learjet distributor meeting in Wichita, Kansas, in the spring of 1964.

During the early days of the Learjet, Lacy talked with Barr many times to get his opinion on issues regarding the Learjet.

“I really respected him as a great aviator and a great person/friend,” Clay says. “I am lucky to have known him all those years… Harry Barr was extremely knowledgeable about aviation and airplanes.”

Chairman Todd Duncan says that Harry was a friend and mentor throughout the aviation community.

“Harry never had a bad word to say about anyone,” Todd says. “I had the greatest respect and admiration for this man who lived his life so well and so fully. He will be terribly missed by all of those who knew and loved him.”

Chairman Emeritus J. Robert Duncan says that the stories about and with Harry will go on forever and ever.

“He was, and is, a legend,” Robert says. “I first knew him as almost a big brother. He lived with our family for a while, taught me how to fly, and gave me my first flying job. The list goes on and on.

“Harry was a natural pilot and athlete. His track record at Clarinda High School still stands. His handstands—on one hand—while drinking a beer are again, legendary.”

Robert continues, “Harry could fly anything, and he did. His love for aviation—the equipment, the people, and the the places that aviation took him—WOW!” 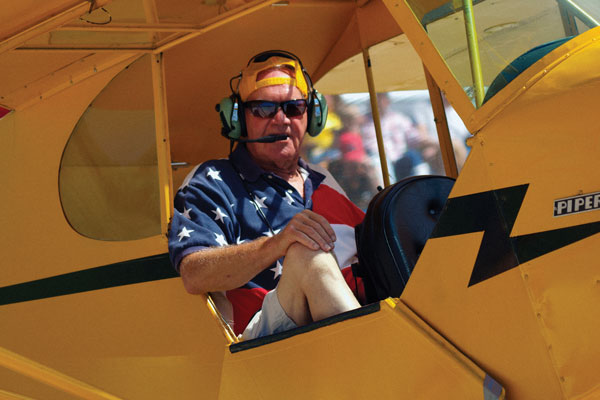 What makes Harry a legend is not his decades in aviation or 30,000 flying hours. It’s not his years of being a flight instructor or helping the younger generation. And it’s not his impact in the aviation industry. It’s the respect he showed others. Harry Barr was a mild-mannered, smart, caring, and kind invididual who would bend over backward to help a friend in need. Harry was not onlyan example of the type of pilot people would strive to be, but the type of person we all strive for.

When Harry heard of friends, team members, or even complete strangers who were struggling, he quietly set about to do what he could to help in any way he could. Looking at Harry and how he lived his life, you’d have no idea of his amazing adventures or his standing in the aviation community. He was just a good, humble man, one of the best.

THANK YOU, HARRY. YOUR LEGEND LIVES ON.