Benefits That Go Beyond A Free Dinner

In 2019, two customers who just happened to be at Duncan Aviation’s facility in Battle Creek, Michigan, met at a customer dinner. They became friends and remained in touch throughout the year. When it was time for the 2020 inspections on their respective aircraft, they realized they were once again scheduled for the same week.

“We provide the dinners as a means to get customers together away from the hangars, so they can grow their networks, of course, but also in the hope that they form friendships and have someone to talk with while they’re in town for a couple of weeks or longer with their airplanes,” says Battle Creek’s Manager of Sales Phil Suglia.

Experience. Unlike Any Other

More than 25 years ago, Steve Gade, who is now the Director of Aircraft Sales, proposed weekly dinners for Duncan Aviation’s customers in Lincoln, Nebraska, after reading that Vail, Colorado, had discovered skiers’ responses to the question, “How was your ski trip?” encompassed their entire experience in the resort town, not just their time on the slopes. He wanted the dinners to make our customers’ experiences at Duncan Aviation memorable, and when first established, it wasn’t unusual for owners Robert and Karen Duncan to join the groups.

Over the years, the popular dinners transitioned to every other week and still offer customers a chance to interact with members of Duncan Aviation’s Senior Management Team and other team members. They also provide customers an opportunity to build community among other customers who are also in town.

“It never fails as we go around the room and introduce ourselves customers find things they have in common with one another,” says Steve. “One time, a customer, upon hearing another customer’s name said, ‘Hey! I remember borrowing a quart of oil from you in Russia!’”

When Solairus Aviation’s Maintenance Supervisor Kevin Jerram from Vernon, New Jersey, decided to entrust the Falcon 900LX that he manages to Duncan Aviation for a C Check in October 2019, he also decided he’d go to the customer dinner held at 600 Place in Kalamazoo.

“The dinners are fairly common now in the industry. OEMs have them, and so do some of your competitors,” says Kevin. “They are a great way to network and get to know other people in the industry. If you just sit in your hotel night after night, you have no chance of learning something potentially useful about your airplane or the industry.”

Aircraft Maintenance Manager for Executive Jet Management Larry Papa from Melville, New York, on Long Island, had not heard of the dinners and was happy Duncan Aviation’s Customer Care Rep Stephanie Alexander told him about them. 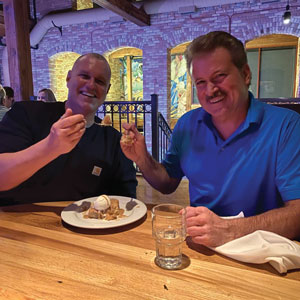 “That first dinner was great because when I met Kevin, we realized we were both in Michigan for C Checks on our Falcon 900s, and we were both from the New York tri-state area,” says Larry. “Even though we’d never met, we knew a lot of the same people in the industry.”

Their Falcons had the same inspection intervals, and Kevin and Larry ended up sharing offices in the same area of the Battle Creek facility.

“We started comparing maintenance notes the very next day,” says Kevin. “In aviation, there’s an endless amount of information and knowledge, so it’s helpful to make these connections, especially when you’re away from home. Then when you’re back at home, you have another expert resource to turn to when you have problems. Larry calls me with an issue he’s having, or I call him. There’ve been times we’ve discussed discrepancies and figured out how to fix them.”

Having the same model airplane gave them something to talk about initially, but the two also discovered they had quite a bit in common, and their friendship developed and continued after they’d returned to their respective companies.

“Often, when you work for big companies, you live in your own little bubble,” says Kevin. “This past year, that’s been especially true. But there’s always something going on, and even as we perform the serious duties of keeping our aircraft safe, it’s nice to have these dinners where we can get together with a friend and hang out.”

The Lighter Side of Life

When Phil found out Kevin and Larry were both back in Battle Creek in October 2020, he and his girlfriend Allison invited them to dinner.

“I just loved it that they met at one of our dinners and became such good friends,” says Phil. “At dinner, they finished one another’s sentences, argued like an old married couple, and laughed like they’d known each other for years. It’s exactly the kind of friendship we had hoped the customer dinners would foster.”

In addition to comparing notes about the aircraft they manage, they’ve also discovered other things they have in common.

Kevin loves pesto, and he was amazed to find that Larry grows about 65 basil plants each summer. He starts the plants from seed indoors and transplants them outside when the temps are consistently warm enough.

“I was surprised when Larry sent me two jars of his delicious pesto for Christmas,” says Kevin. “I grill out year ‘round unless there’s too much snow. I’ve been grilling fish and putting Larry’s pesto on it. I also put it on a pasta and even smear a little on bread.”

Larry discovered that Kevin also loves olives. On a weekend road trip to the Lake Michigan shore, Kevin insisted they stop at an olive store in South Haven.

"It's exactly the kind of friendship we had hoped the customer dinners would foster." Phil Suglia, Manager of Sales, BTL

Kevin also showed Larry how much better cheese is with Triscuits® instead of soda crackers.

The Value of Networking

Larry and Kevin agree that the ability to network with people in the industry, and especially someone with the same aircraft, has been a benefit to them both.

“I’m a big proponent of forming relationships with vendors and cultivating relationships with other maintenance technicians in the corporate aviation industry,” says Kevin. “At the end of the day, we’re all one team. If there’s a broken airplane, we all have the same goal: Let’s get that airplane off the ground.”

Larry agrees. Networking helped him make friends in the industry and engage in the casual work talk that leads to solutions to problems.

Both guys feel that they’re more informed about the industry in general and their aircraft specifically by taking advantage of every opportunity to network, whether it’s a conference like NBAA or a customer dinner at Duncan Aviation.

Additionally, Kevin and Larry are planning to take their Falcon 900s to Battle Creek for their 2021 inspections this October.

«Previous: Connectivity, Comfort, and Cabin Ambience
»Next: Carrying A Theme Through A Fleet With A Few Unique Touches