From Mild To Wild 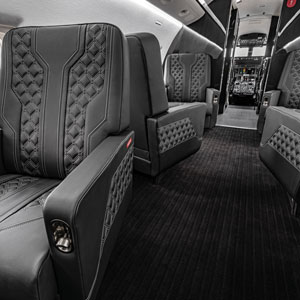 Our Battle Creek, Michigan, team took a well-used CL604 and completely updated and transformed the aircraft. Focusing on current design trends and incorporating the owner’s specific tastes, Duncan Aviation’s Lead Designer Emily Krawczak pulled together blacks, grays, and silvers for an eye-popping interior. In addition to the highly stylized interior, the aircraft received new paint, avionics upgrades, and a 12-month inspection, and it was provisioned for an aero-med air stretcher unit.

Based out of Australia and with limited resources for this type of project, the first-time jet owner was looking to transform his well-used aircraft to something contemporary that centered around current trends.

“Because the owner was represented by a management team, they brought this pre-owned, U.S.-based aircraft to us knowing it would eventually be registered overseas,” says Completions/Modifications Sales Rep Adam Bruce. “It was in desperate need of a refurbishment, and the owner requested a contemporary interior that also allowed for comfort on long flights.”

When it landed at Duncan Aviation, the aircraft’s colors were outdated browns, golds, and beiges. At delivery, the interior featured blacks, greys, and silvers, which landed the aircraft right in the 21st Century.

The owner and his wife had a general idea of how they wanted the interior to feel and worked closely with Emily to bring their vision to life.

“He liked darker colors, while his wife wanted the aircraft to be light and bright,” says Emily. “I think we struck a great balance between the two visions. He also was very interested in a highly-customized chair design.” 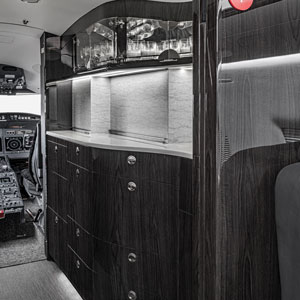 The Duncan Aviation Interior team touched all aspects of the interior except for the cabinet interior laminate. The project was highlighted by a full hydrographics package for all of the woodwork, customized seat upholstery, laminated upper galley accents, new soft goods, and new plating.

The aircraft was also provisioned for an aero-med air stretcher unit with an air-stair lift mechanism, removable left-hand forward bulkhead to accommodate the stretcher install, and custom floor covering for medical missions.

“All of those items are able to be removed to convert the aircraft for special missions, as well as standard use,” says Adam. “It’s basically a plane ambulance. Medical services in Australia sometimes require travel to access, and this aircraft is now capable of safely transporting patients over long distances.”

The owner had seen a model of another aircraft with a similar paint scheme and fell in love with the colors. The challenge was to find aircraft paint that matched, so the Duncan Aviation team had their paint vendor do a custom match.

“After that, it was a matter of finding the right color combination,” says Emily. “He was very involved in the process, and in the end, we produced an original and striking paint scheme that looks fast.”

The aircraft exterior was painted in a platinum pearl base, and included a stone pearl nose that fades into diagonal stripes along the body, creating an ombre effect. The stripes carry onto the engines, providing balance to the scheme. Pops of gold on the body and winglets add interest and color.

Seeing only renderings of what the paint and interior will look like always gives a sense of heightened anticipation around the shop as we await the completion of the project.

“The owner only had positive things to say about seeing his aircraft paint in person,” says Emily.

The aircraft also received avionics upgrades for new lighting, installation of new USB inputs, and removal of obsolete monitors, replacing them with a charging hub for personal devices inside the aft divan cabinet. We also created a new audio interface unit and installed a Gogo Airshow Mobile 2 unit.

The teams at Duncan Aviation performed a 12-month inspection, fixed an Ice Protection Service Bulletin, replaced Landing/Taxi LED lights, and produced an export certificate of airworthiness necessary for the aircraft to leave the United States and fly home.

«Previous: The Changing Landscape Of Aircraft Sales
»Next: A Bold Statement